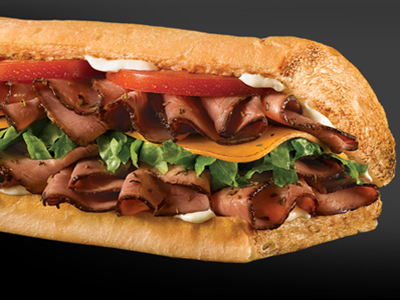 Buying a fast food franchise no longer means you are considering a McDonald's.  Today there are a lot of big competitors in the fast food franchise for sale market and one of the largest is Subway.  Both Subway and Quiznos have entered a highly competitive industry and made a place from themselves by offering menu items that differ from traditional fast food items like burgers and fries.

So in the battle of fast food franchises, Subway vs. Quiznos, who would win?  Let's explore the pros and cons of each and see how they stack up.

Subway has carved a place for itself among industry giants as a healthy alternative to traditional fast food.  Subway has grown rapidly and today has almost 39,000 locations in 101 countries.  In addition to being popular with its customers, Subway has also been successful at keeping the costs of opening a franchise relatively reasonable.

Brand -- Subway has built an extremely strong brand name through advertising campaigns.  As a franchise owner, you won't have to do much more other than put a Subway sign up for potential customers to recognize your business.  As a franchisee you would be required to contribute to their marketing expenses paying 4.5% of your gross sales each week back to the franchisor for advertising.  This could definitely be seen as a con as well but without advertising their brand probably wouldn't be as big as it.

Cost -- Subway franchisees are required to pay a $15,000 franchise fee to get started.  From there, it typically costs anywhere from $100,000 - $250,000 to get your Subway franchise open and ready to serve customers.  These costs are lower than many other fast food franchises but still higher than Quiznos, which is another reasons Subway has been a popular choice for many Entrepeneaurs.

Fees -- As I mentioned above, Subway requires their franchisees to make weekly royalty payments totaling 12.5% of weekly gross sales.  8% goes toward the franchise royalties and 4.5% goes towards advertising.

Quiznos has also done well in the fast food franchise business by offering a sandwich alternative to traditional fast food.  Quiznos is however much smaller than Subway and not as widely known.   Several years ago, the franchise actually ran into some financial trouble and had to restructure in order to stay in business. Today, Quiznos has about 4,400 locations around the world.

Cost -- The costs to open a Quiznos franchise are typically less than that of opening a Subway franchise.  The total cost to open ranges from $155,547 to $233,726.  It covers all costs, including the franchise fee, architects, even your initial food order.

Competition -- There are less Quiznos locations so you will most not be competing with other Quiznos franchisees for business.

Fees -- Quiznos royalty payments are lower than Subway's.  With Quiznos you will pay 7% of your weekly gross sales to them after discounts such as coupons.  4% of that goes toward advertising.

Company History -- As I mentioned earlier, several years ago the company had to do some restructuring in order to stay in business.  While they seem to have things in order now, as a Quiznos franchisee you will pay 7% of your gross sales to them so you want to be sure you are working with a solid company.

In my opinion, it is a toss-up!  On one hand you have Subway, which is a highly recognized fast food franchise throughout the world.  They have a solid franchise system in place and the company is growing but they cost more to open and operate.

Quiznos on the other hand is not as widely recognized but is also working to grow and investing resources to do so.  The cost to open and operate a Quiznos franchise is less than Subway and you will have less competition with other franchisees in your market.

Taking all this information into consideration, I'd say when buying a fast food franchise and deciding between a Subway vs. a Quiznos I would recommend looking at your own market.  Is there a Subway on every corner?  If so considering a Quiznos may be your best bet, but if you're in a market that hasn't been flooded by Subway locations, I think Subway is good choice based on their brand recognition and strong company history.

Categories: BizBen Blog Contributor, Buying A Business, How To Buy A Business

Thank You For Your Submission. Your Comment Or Reply Will Be Posted Shortly.
Comments Regarding This Blog Post

Contributor: Joe Ranieri, Business Broker: LA, Orange Counties
I know at one point (and they may still do) Subway had a 'Wonderlic Basic Skills Test' (WBST) for potential franchisees. This test gave the franchisor an assessment of a potential franchisee's proficiency in math and English skills. I work with many clients who were not born in the United States and so this test has been challenging for some of them. I only say this because this might be something a buyer should investigate if they struggle with English and Math skills, I have heard from native English speakers that even they find it challenging.

Recent Blogs & Articles:
What Are Business Buyers Biggest Mistakes? We Examine The Most Common

Due Diligence - Buyers Role When Buying A Coin Laundry

When Seemingly Smart Buyers Make Fatally Not So Smart Decisions!

Buying A Restaurant: 5 Myths Restaurant Buyers Should Know About