Should I Buy A Small Business That is Losing Money? Brokers & Agents Dis...

Working With The ABC - Inside Look At Liquor Licenses

What you will read in this article you will probably not find in any manual or set of instructions provided by the ABC. What I write about in this article is about the many things I have learned the hard way over 20 years of working as a restaurant broker with the ABC to transfer beer and wine and full liquor licenses.

Be very accurate: I just can't stress this enough. The ABC will kick back an application that has a single letter wrong in a person's name. If the street address has the wrong suite number or zip code, it could be kicked back. Notice I said could. The problem is, the ABC checks these things manually. That means that the investigating officer will check it, then the supervisor will check it, and finally, it will be checked just before issue. It is possible that they will not find the error. The problem is, if you get something wrong, it may not be found immediately, and you may get a notice on the last day just before issue, after a 60 day processing time, telling you that a name or address is wrong and you need to republish which will delay you 10 more days. This has happened to me more than once.

Reveal everything: There is a question on the application regarding past convictions. It is very important that you fill this section out completely and accurately. Don't assume that just because something happened a long time ago, it will not be known to the investigator. I once had a client who had two DUI's and was concerned that he might not be approved for a license. I strongly recommended that he reveal both DUI's even though one happened many years ago. He did reveal them, but when his license did not transfer in a timely manner, we inquired and were told that his background check had not been approved yet. We were sure that it was because of the DUI's, but it wasn't. The applicant had neglected to reveal an incident that happened when he was a teenager because he thought it was so long ago it didn't matter. It turned out, that the DUI's were not a problem because he had revealed them, the problem was the teenage problem because he failed to put that on his application. This delayed the transfer by four months. In the end, the transfer went through but not until he wrote a letter of explanation as to why he did not but it on his application and went through a formal interview with the investigator.

Check the special conditions:  Licenses have special conditions. These can be found on line but are not printed on the face of the license. This is especially important in the San Francisco city because certain streets or districts have special restrictions that are carried on the license. Restrictions can be for hours of operation, outside seating, or in one case, the use of a bar to serve alcohol. I had one experience with a transfer that did not allow the use of a bar to serve alcohol. We didn't know this until the ABC did their field investigation and discovered that the restaurant was using a bar to serve alcohol which was not allowed according to the license. Over the years, the restaurant had turned a small counter into a food counter, which morphed into a food and bar counter- then expanded into a full bar with shelves for bottles and wine glasses. I had never seen a restriction like this and the owners couldn't believe it either because they had been using the bar this way for many years and so had the previous owner. Nevertheless, the ABC was insistent that alcohol could not be served at the bar (only at the tables) and the deal fell through!

ABC issued licenses carry transfer restrictions:  I learned the hard way that licenses that are issued by the ABC in a lottery can't be transferred for five years from issue. These licenses are usually sold below market and are sought after by restaurateurs but they do carry this restriction. I was selling a restaurant that wasn't doing well after one year in business and the seller and I discovered that his license could not be transferred for another 4 years- after I had a signed contract.

Include the patio:  If you are planning to serve alcohol on an outdoor patio, make sure you include it in your drawing and make sure you provide a barrier around the seating to keep out the general public.

Record in the right county:  I recently had a licensee record the 226 from with the county recorder in the wrong county. It was not caught until the very last day before it was scheduled to be issued. It had passed the investigator and her supervisor and it cost us a 10 day delay.

Be nice and follow up:  The ABC people are very busy. They handle a lot of paper work and things can get delayed. It is best to follow up on a regular basis with the investigator to make sure they have everything they need. Often they will wait quite a while before notifying the applicant if they need something which delays the process.  I know this is common sense, but being pushy and complaining about delays or mistakes will not usually help you. I have gotten favors and special treatment for hardship cases when I have been able to establish a rapport with the investigating officer.

Special help:  Most people can get through the process and don't have a problem filling out the application. The ABC will help you if you have questions. I mentioned how important it is to get everything perfect so as to not delay the process. There are people who specialize in helping people with the ABC process. They hire themselves out as expediters and some of them are retired ABC employees so they know the ropes and for some people they are lifesavers.

Categories: BizBen Blog Contributor, Buying A Business, Deal And Escrow Issues, How To Buy A Business

Other Related Blog Posts, Articles, And Discussions You May Be Interested In

Working Out A Deal: Things To Consider When Buying A Boutique Fitness Gym

First thing you may be asking, what is a boutique gym? Simple, a boutique fitness gym is on average much smaller than your typical large-scale gym, ranging from 800 to 2,500 sq ft. In this BizBen blog post, Joe Ranieri (Southern California Business Broker) discusses this topic for gym buyers.

Buying A Gas Station Business: What To Look For When Doing Due Diligence

More and more we see "Coinless Laundromats". Anyone in the business or entering the business will face the age old question; Coin or Card? Well, perhaps it's not an age old question, as card systems haven't been around very long, but it is a question worth considering. Steve Erlinger explains.

We are finding that many laundry buyers and investors are not being given true light to selected elements of value or there are inconsistencies in the interpretation of these elements of value. This common error needs to be addressed. In this BizBen Discussion we address many of those factors.

As A Business Buyer What Questions Should I Ask The Owner, Seller Or Broker?

Asking the seller straightforward questions and getting straightforward answers in return is an important part of the buying and due diligence process. In this Discussion, both ProIntermediaries and Advisors offer thorough questions you should be asking during your meeting with a business seller.

The key to finding the ideal business broker or agent and selling a small business is asking the right questions and getting the right answers back! Peter Siegel, MBA with BizBen & several top business brokers and agents (ProIntermediaries) in California contribute to this topic to assist sellers.

Should Sellers Of Small Businesses Give Potential Buyers Their Tax Returns?

Should small business owners/sellers or brokers/agents give potential buyers direct access to past company tax returns and financials (profit & loss statements) either before or pre the due diligence process? Multiple ProIntermediaries and ProAdvisors discuss this topic on this BizBen Discussion.

The use of add backs & sellers discretionary cash is common among sellers of businesses when showing their financial information & explaining that the buyer will actually enjoy more profit than is shown. But buyers are cautioned to review documents closely. Peter Siegel, MBA with BizBen explains.

Selling A Small To Mid-Sized Business: 13 Crucial Items To Sell A Business

Only 30% of all small businesses for sale that are put on the market overall are sold! A surprising statistic to most business owners, agents, and brokers trying to sell a small business! If however you follow the strategies (BizBen Protocol Method) in this blog post you should see success!

Before you buy a dry cleaners small business, read these critical tips about this industry. Discover why a dry cleaner needs to be "green" to be profitable. Peter Siegel, MBA (BizBen ProBuy, ProSell Program Advisor) explores this topic and other helpful strategies on buying a dry cleaning store. 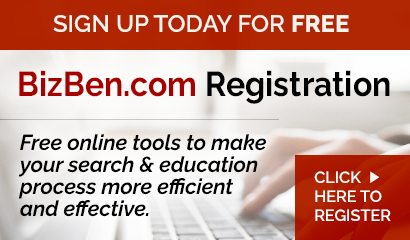 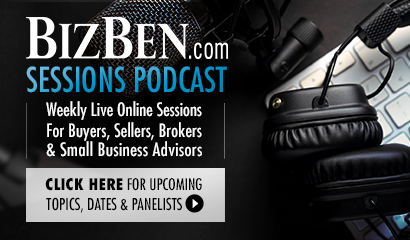